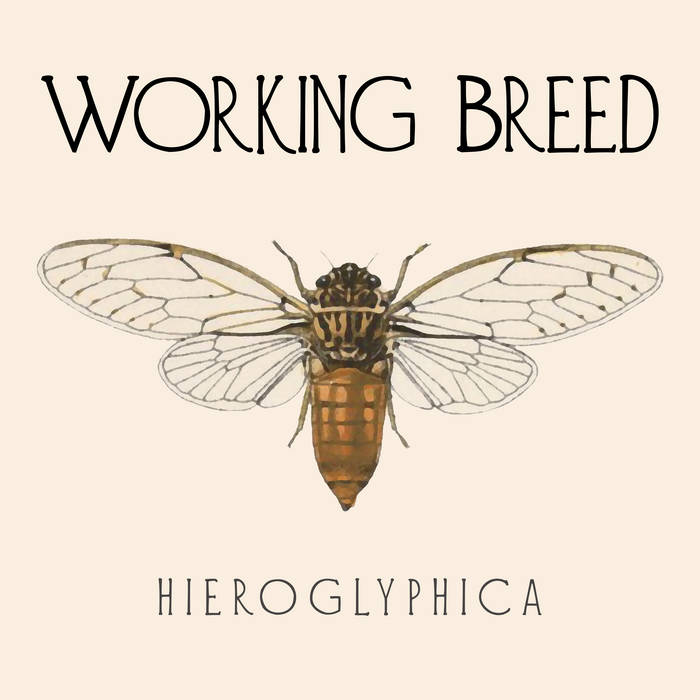 Working Breed has captured and pinned their trademark audio-eccentricity in their long-awaited first full-length concept album, Hieroglyphica. The record is composed of 10 tracks spanning from the roguish overture “Mo Fo Ro Ro”, to the outlandish surf-rock and spoken word closing number, “Orange Fluff”. In between, the album’s story arc is formed through jaunty songs of independence, histrionic ballads of heartache, and reverent tributes to healing. True to their art rock roots, the album features a solid driving base interwoven with their unusual instrumentation including trombone, trumpet, musical saw, and even an ancient Chinese sheng, one of the first polyphonic instruments invented by man-kind.

“I’ve always been drawn to unusual sources of sound,” says frontwoman Erika June Christina Laing, “particularly those that are historical or come from nature.” She has a penchant for the avant-garde, tucking in samples of the cicada species “N. hieroglyphica” for which the album is named, and even using her science and tech background to create a special interstitial introduction to the song “Sensitive Plant” by recording the minute magnetic fields of a Mimosa Pudica plant and transmuting them into the audible spectrum. “It sounds a bit like white noise, but organically soothing. You can think of it like you are eavesdropping on the plant as well as the fluctuating world in which we all live.” She then layered synthetic whispered speech on top, a poem from the plant’s perspective. “It’s a little like an auditory Magic Eye painting,” says Laing, “At first, the speech sounds are hard to understand, but once you grasp the plant’s ‘accent’, you won’t be able to unhear it.”

That’s not the only surprise on the album, which has been meticulously produced by the band members along with their audio engineer, Matt Vaughan, at Hollywood Studios of Pittsburgh. “We made a great team and came out with the best possible product,” Vaughan says, “I would not have wanted to do this with anyone other than my best friends.” Vaughan worked exhaustively with the band to perfect every aspect of the album, such as on the track “Cicada” where he ensured that the musical saw rings clean and pure and that the searing guitar solo swarms like insects around the listener. On having the mastering done by Frank Arkwright, Vaughan says, “Going to Abbey Road Studios with the final product and hearing it back in perfection is truly the pinnacle and everything we hoped for.”

The hard-earned result is an aural amalgamation of minds. “Hieroglyphica is a carnival of the many facets that make up who we are as individuals and as a band,” says Laing, who emphasized that everyone added their own dimension, emotive rock from guitarist Michael Dugan, clever arrangements from bassist Jonah Petrelli, jazz feels from keyboardist Chloe Wiecz, and big-top precision from drummer Jeremy Papay. And though Laing brings the quirk with her gymnastic vocals and multi-instrumentalism, the album never loses its core rock roots. Dugan says, “I always thought that for all the genres we cross through, it’s still a very guitar centric album. Almost all of the tracks have a solo on them, which is something to be proud of in today’s day and age.”

From start to finish, Hieroglyphica is a cathartic journey of creativity, buoyant in its balance of levity and cogitation and with a spectacular payoff that can only be described as extraordinarily different yet stunningly intimate.

MANY THANKS TO
Liveburgh Studios, Chris and Zack Leya, for helping us to record their chimes for Daffodil
Jacob Nathanson (Cell0), Patrick Forsyth (Violin), and Beck Gard (Harp) on Turtle Race
David Marshall (insectsingers.com) for the generous use of his cicada sound samples
Sam Stein for his valuable songwriting contribution to many of these tunes
Colin Morgan for the essential use of his cowbell
And, last but not least, you, the fans!

ALL RIGHTS RESERVED UNAUTHORIZED DUPLICATION IS A VIOLATION OF APPLICABLE LAWS

Manufactured in the USA

Working Breed is a scintillating quintet that writes original and eclectic Art Rock full of surprises. Described by First Angel Media as “Steely Dan turned up to 11 and rocking out in a Prohibition-era speakeasy”, their music is is a carnival of sound as the group journeys together through jaunty songs of independence, histrionic ballads of heartache, and reverent tributes to healing. ... more

Bandcamp Daily  your guide to the world of Bandcamp